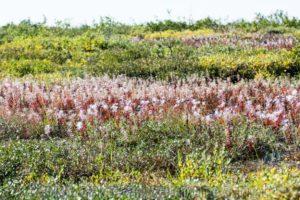 As promised in my last post, the following posts will be about our stay at the Seal River Lodge, which is located north of Churchill at the coast of Hudson Bay. 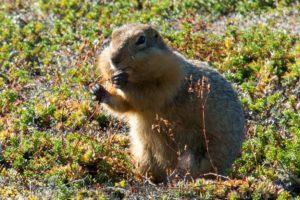 After a very scenic flight from Churchill over the tundra, we landed on the gravel landing strip close to the lodge and entered the land of wonder. It was truly amazing for us to see this landscape without the cover of snow for the first time! We were greeted by Terry and Rob, our guides on this trip. We knew Terry from our trip to the Dymond Lake lodge and it was great seeing him again. There we had experienced his calm demeanour when confronted with a slightly to curious polar bear, so we knew we were in good hands.

Rob, we learned later, was actually with us at Nanuk Lodge in March, but he was more acting behind the scenes and we didn’t really get to meet him there. We for sure would have remembered him, since his laugh is unforgettable.

Our luggage got loaded onto a six-wheeler to be transported to the lodge, while we had our first little walk in the beautiful autumn tundra. 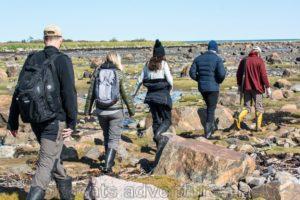 Out on the first hike 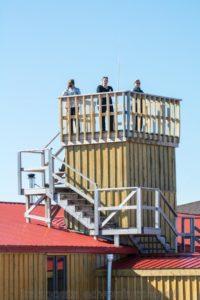 We were greeted by Snow geese and our first Sik Sik. How I love these cute little Arctic ground squirrels. They are just adorable and as comical as mercats. They are one of the few true hibernators in the arctic. After they have fattened up enough for hibernation they start collecting food to store in their burrows. This will allow them to have food straight away when they wake up in springtime. I seriously considered hibernation as an option for myself, since the “fattening up” in Canada was rather successful, but I would miss my favourite times of the year, so possibly not such a great idea after all.

Familiar faces awaited us at the lodge. Jeanne (the co-owner) and Kim, who was at Nanuk in March, where there. And after a lot of hugging and cheering, we were shown to our rooms. The room was very comfortable and big, with a nice en suite. We looked out onto the yard, where we could watch the Sik Siks running around. From time to time we also had an arctic hare pass by. The common area as well as the dining room have massive panoramic windows, to make sure you are not missing a thing that happens outside while being inside enjoying the cosiness of the wood fire with a cup of tea/coffee on one of the settees or a fabulous dinner.

As soon as the second part of the group arrived, we enjoyed our first lovely meal at the lodge. 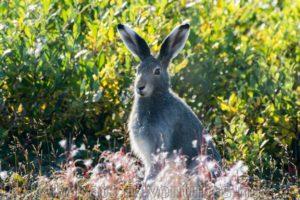 With energy storages refuelled, each of us got some rubber boots and we finally went on our first hike.

We already had spotted our first polar bear from the viewing tower of the lodge, but he was well hidden in the grass and therefore not straight away identifiable as the biggest land predator (it actually could also have been the common polar bear rock-they have many of them here in Canada).

We decided, if he doesn’t come to visit us, we will go and visit him. After we had a briefing on how to behave in polar bear land (especially when approaching one of them) we left the fenced in compound and made our way towards Bryan, the polar bear. It is rather exciting to see such an impressive animal without a fence in-between you and him. It looked like our presence didn’t really strike his interest. Guess we didn’t smell like dinner 😉

He lifted his head, sniffed around and showed us his impressive teeth, to demonstrate what would await us, should we dare to annoy him. 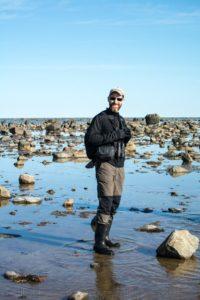 After watching him doing nothing we decided to carry on and see if he might be more active on our way back. It was low tide and we walked around at the shore of Hudson Bay.

In summer large area of the tundra are covered in fireweed. All the plants are now covered in shiny seeds and when they get air-lifted, the seeds are like little sparkles in the sun. 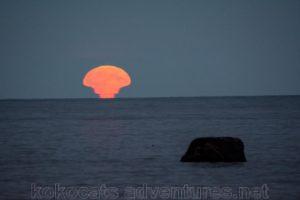 Bryan didn’t have an activity boost when we passed him again, but later on, he decided to find a new resting area and walked passed the lodge. His activity also caused a brief moment of excitement at the lodge and we watched him find his new sleeping place.

At 7pm we had some drinks and snacks prior to dinner time. While we were at the dinner tables the full moon started to rise. This was quite a sight, since the moon seemed to be oddly shaped and bright orange.

Later on clouds started to cover the night sky and sadly there was little chance to see the most fascinating night entertainment this trip can offer – the northern lights.

I checked every hour or so, just to make sure we are not missing it.