It’s one of those things that our civilization keeps getting wrong. Having spent lots of effort and money to tame our worlds rivers, we realize that we’ve gone too far and try to revert things back to how things might have been. We build channels, divert waterways and drain large areas, only to realize that we are changing the entire ecosystem for the worse, and now have to pump water from far away, irrigate the fields much more than before and loose those green belts that we actually quite like for cleaning our air or for taking a walk with the dog. (An interesting read on the past and future water crisis is “When the Rivers Run Dry”!) 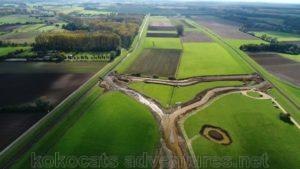 Aerial of the new river, photo courtesy of the weschnitzinsel.de project

Today and last week, Anja and I spend a few hours to help with a project very close to our village Hüttenfeld to revert one of the tamed rivers – a very small creek actually – back to a more natural state and establish a nature conservation area. The “Weschnitz Insel” (Weschnitz Island) is already know to be an important breeding ground for many bird species as well as a resting place for migrating birds – including the crane, which we are hoping to see ourselves here as soon as possible! In Germany we have laws in place now pushing towards clean water and better protected rivers and this area was chosen to receive special attention. Substantial funding is being put into a project to break up the two channels the water is running in now and bring back the original stream in the middle in a more natural state. You can read all about it here (if you know German or trust Google translate).

The new riverbed has now been prepared and the water has started to flow in new ways. Anja and I joined as volunteers to rescue small animals from the old riverbed as it started to dry out. Other teams were going through to catch fish using electro fishing, where you stun fish with a small electric current. It looks a bit shocking to see the little guys float to the surface where they are collected in nets and buckets. But already on the way to the truck that brought them downriver they were coming back to live and were ready to be put on a special slide back into the water. 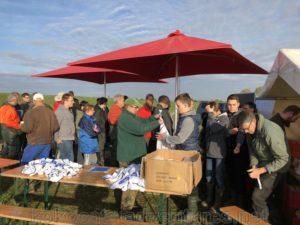 Volunteer registration, we’re in Germany after all! 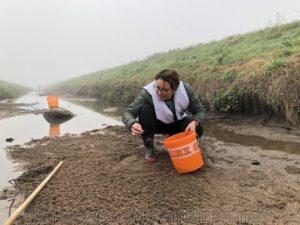 Mussel hunting in the mud

Our job was a bit more fiddly as we were raking and digging through the mud trying to find freshwater mussels (“Flussmuschel”, unio bivalve) as well as anything else we could get into the buckets. The occurrence of these mussels is a good sign that the water quality is already in a good state – but the numbers are very low and even after many hours sitting in the mud we had only found a single one! Other volunteers working up or down the river had a bit more luck, but in total still only a few buckets full could be relocated to the new area! We did find more of another type of mussel – an invasive species of corbicula that was brought from Asia to North America and then to Europe a while ago. But we also rescued crayfish, larvae of dragonflies, damselflies, caddisflies and a few other bugs that failed to identify themselves. Most abundant was a type of beetle however that was smaller than my little finger nail and not easy to catch. Having collected dozens of them in our buckets along with the other guys, I realized that they were attacking the mussels and pretty much everything else! They are a type of predaceous diving beetles and had to live in a separate bucket from then on.

Trying to catch baby fish that the electro fishing teams had missed was another challenge and after a few hours we were happy to break for lunch and chat with others that had come out to join the fun.

We are now looking forward to see how the new area develops and what kind of birds might come and visit. 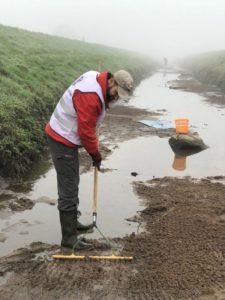 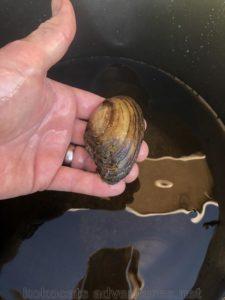 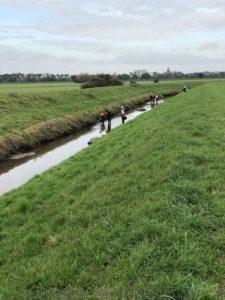